Disclaimer: Weather is a mix of pattern and chaos; these ideas are from the patterned world.

La Nina is caused by cooler than normal seas along the equatorial eastern Pacific. It shifts the subtropical ridge away from the equator and strengthens the trade winds.

The parameter we watch from the atmosphere is the Southern Oscillation Index SOI (30 day running mean) which is basically the (normalised) air pressure difference Tahiti-Darwin.

This entered La Nina territory last month and has relaxed a little in past few weeks.

SOI can be seen at http://www.farmonlineweather.com.au/climate/indicator_enso.jsp?c=soi&p=weekly

The parameter we use here is the average sea surface temperatures in the equatorial eastern Pacific zone NINO 3.4. This index has been steadily dropping for weeks and entered La Nina territory late November. Looking at the two graphs shown here, we can see that the atmosphere and ocean have “coupled” in their behaviour, or are doing the same thing. 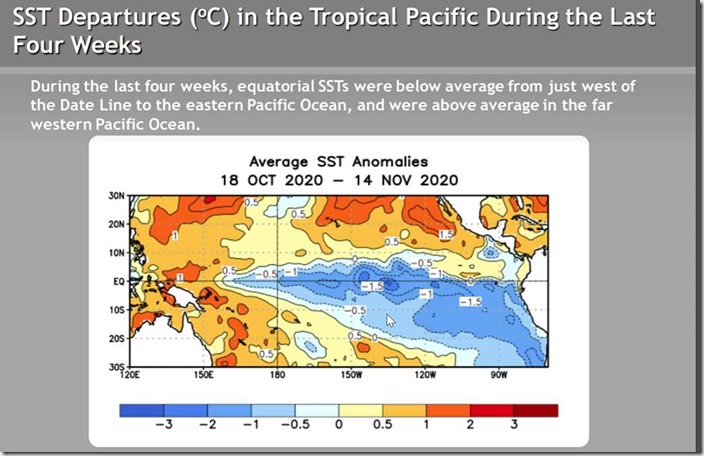 The warmer than normal seas between New Caledonia and New Zealand are likely to enhance low pressure systems in the Tasma sea and increase the risk of tropical cyclone formation over next few months.

According to the International Research Institute of the Climate Prediction Centre, this La NINA should peak early in 2021 and has a 65% chance of lasting until May 2021.

The latest cyclone activity report is at tropic.ssec.wisc.edu and Tropical Cyclone Potential is from www.ssd.noaa.gov/PS/TROP/TCFP/index.html

TC IOTA brought more deluging rain to Central America in the past week.

Things seem to be quietening now, with a tropical depression about to make landfall onto the horn of Africa., and some potential areas for formation s around Indonesia. 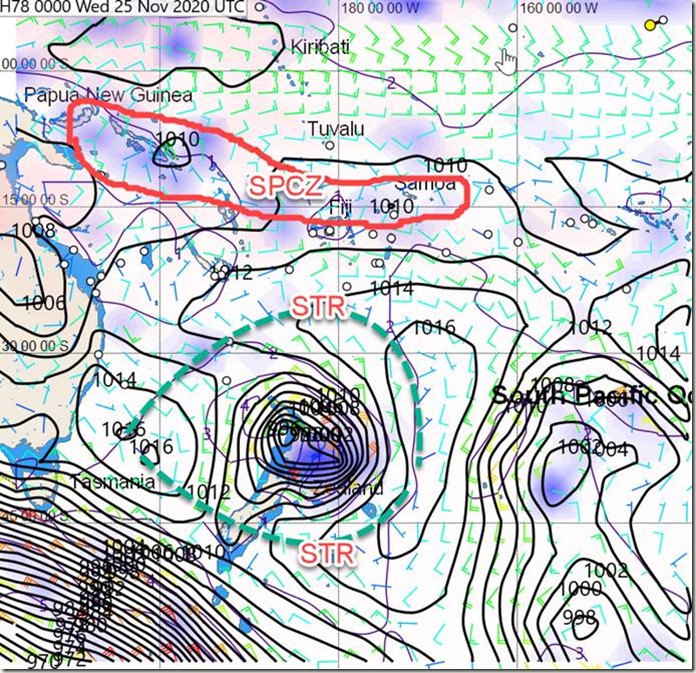 SPCZ is in its normal position from Solomon Islands to Northern Vanuatu to between Fiji and Samoa..

A trough is expected to form over Samoa early in the week and travel over Niue/Southern Cooks around mid-week. 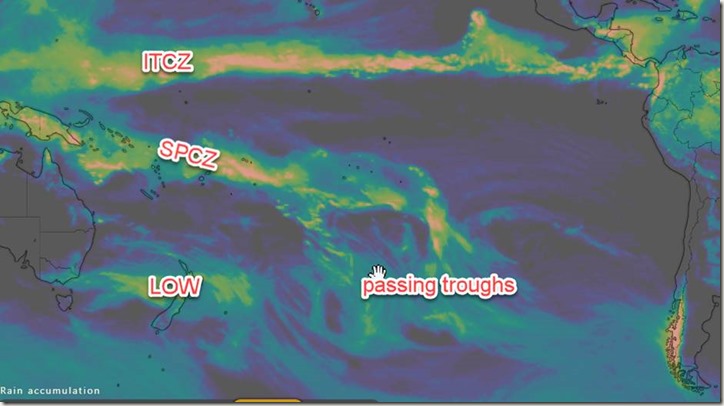 HIGH/ridge is expected to travel east across the North island on Monday and then go east along 30 to 40South.

Next High is expected to arrive in Tasman Sea on Wednesday and linger there until the weekend, drifting northwards.

LOW 990hPa is expected to move from Tasman Sea onto North Island on Tuesday and off to the east on Wednesday followed by southerly flow.

Low below 960hpa is expected to travel east near 60South on Wed/Thu/Friday bringing vigorous west to SW wind flow to South Island.

If you would like more detail for your voyage, then check metbob.com to see what I offer.