Disclaimer: Weather is a mix of pattern and chaos; these ideas are from the patterned world of weather maps, so please fine-tune to your place. Dates are in UTC unless otherwise stated.

The Atmosphere: The Southern Oscillation Index or SOI (30 day running mean) is based on the barometer readings from Tahiti and Darwin and sums up the weather pattern over the South Pacific in one number. It was almost minus 1 during December, relaxed to near zero during January, fell to minus 0.9 during mid-February and has recovered to minus 0.38 by 3 March. So it is unsteady.

SOI since Jan 2010 in weekly update from

The Ocean: Sea surface temperatures across the equatorial Pacific may be thought of as a thermostat for the planetary weather engine. When they are different from normal we get a change in clouds around the equator and in the latitude zones of weather across the whole Pacific.

Well, in the past month the SST in this target zone has been slightly below normal, but relaxing toward normal, indicating a tendency towards neutrality.

The weather is getting busy in the South Pacific over the next few weeks.

A Madden Julian Oscillation of enhanced convection is moving from the Indian Ocean onto northern Australia and towards the Coral Sea, and this is likely to increase the risk of tropical cyclone formation during the next few weeks. 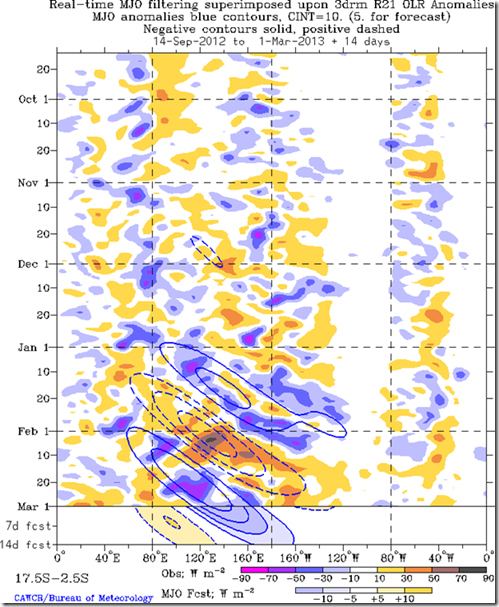 The blue area shown above marks an MJO event moving into the Coral Sea this week, as seen at

At present there are no tropical cyclones around, but there is a good chance that one may form in the Coral Sea by Tuesday 5 /Thursday 7 March and deepen there and go onshore on northern Queensland around Monday/Tuesday 11-12 March. There is likely to be a squash zone of strong SE winds between this low and the High in the Tasman Sea.

The South Pacific Convergence Zone SPCZ has strengthened during the last week and at present extends over Coral Sea, Vanuatu, Fiji /Samoa, Southern Cooks and French Polynesia. Tropical Lows are likely to form in the Fiji to Niue area by Tuesday 5 march and move off to the SE /S – to the area east of NZ, accompanied by squally showers with winds sometimes gale force. Avoid.

The Sub tropical ridge STR extends from Aussie Bight across the Tasman Sea / NZ area and then eastwards along 45 to 40S. The High in the Tasman Sea tonight is a slow-mover, well supported aloft and somewhat blocked, keeping rain bearing features away from NZ for a while. It is expected to divide into two centres straddling NZ by Thursday 7 March.

The high centre over eastern NZ is expected to move away on Fri 8 March and that allows a brief southerly front to make its way northwards along NZ’s east coast. Straddling Highs are then expected to reform over NZ for a while.