Disclaimer: Weather is a mix of pattern and chaos; these ideas are from the patterned world of weather maps, so please fine-tune to your place. Dates are in UTC unless otherwise stated.

The Ocean:  Seas surface temperature anomalies around the Galapagos are now relaxing back towards normal,  but warmer-than-normal sea are shifting westwards into the central pacific,  indicating we are on the verge of a new El Nino episode, but we are NOT there yet.

The Atmosphere: The Southern Oscillation Index or SOI is now dipping quickly. Its 30-day running mean rose during July from -1.21 to +0.27 and dropped to -0.65 by 12th August and -1.08 by 18 August. So the atmosphere is now tending towards El Nino, following the Ocean.

Tropical cyclones:  In the NW Pacific we have TEMBIN heading for Taiwan, but it looks mediocre compared with HAIKUI a few weeks ago.

In the Atlantic we have GORDON with an eye near 35N and hurricane winds over Azores.  This system is breaking a few of the rules but it is likely to fade after Tues 21 Aug west of Portugal.

In the South Pacific, the Convergence Zone SPCZ continues to be fairly quiet. There has been a weak CZ over the eastern Coral Sea occasionally affecting Vanuatu and New Caledonia.  This looks to be reforming over Solomons this week.

Another convergence zone CZ has been lingering between 3 and 10South from 170E to 160W and then tapering off to the SE well east of French Polynesia FP- unusually north and east of normal for the SPCZ even for El Nino conditions.  Some welcome rain for Kiribati.  This is making another good week for sailing from Tahiti to Tonga without being bothered by the SPCZ.  However the trade winds on route may be fresh to strong around 15S on Monday and Tuesday 20nd 21 Aug, and again around FP on wed/Thu 29/30 Aug. There seems to be a link between El Nino and strong trade winds.

The STR is sticking to its northern latitude position along 20 to 30S cross much of the South Pacific.

Even the High centre near 45S 140W tonight is moving north-eastwards towards more tropical latitudes so that isobar patterns are approaching climatology in both western and eastern parts of the South Pacific. 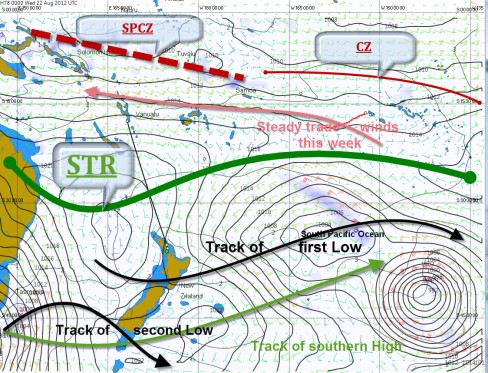 GFS computer model at 0000UTC  Wed 22 Aug . Isobars at 2hPa intervals, Significant swell height at i metre intervals. Symbols are in the  text.

A High is expected to move along 47S to south of Tasmania on Monday 20 Aug and cross the South Tasman on Tie 21 Aug and South Island on Wed 22 Aug and then move along 45S to 160W by Sat 25 August.  The accompanying high marking the STR should move along 30S into N Tasman Sea on Mon20 Aug and then crawl towards North Island and fade there by Thursday 23 Aug.

Another High marking the STR should move along 30S into the North Tasman Sea on Sat/Sun 25/26 Aug.

South of the SR we have the roaring 40s plus some more in what has been a series of Tasman Lows all during August.  There is one crossing central NZ tonight and going steady eastwards, but leaving a trough in its wake.  Its upper trough should cross North Island on Monday evening.   This should mark the end of the series: The next Low is likely to fade in the Tasman Sea on Sat and Sun 25 and 26 Aug.

Traveling towards New Zealand this week:

If you can time it, then aim to arrive in NZ on late Thursday, during Friday, or early Saturday (before next weekend’s trough arrives).

Anyone with internet access can see some of my talk as guest speaker last Monday to Cruising and Navigation Association of NZ’S Annual dinner:

Also here is a link to a letter to NATURE magazine about how climate change is making the SPCZ more erratic:

Note that Raro Met man Arona Ngari is one of the co-authors (well done– pity the yachties can’t get to Rarotonga this year because of harbour reclamation).

is a satellite photo of the volcanic eruption around 85 miles SW of Curtis Island in the Kermadecs on July 17/18; this was the origin of the rafts of pumice between Tonga and NZ during last few weeks.  The volcano has since gone quiet.

Here is a photo of the WAKA that departed Auckland on Friday heading for Easter Island,  as last leg of Hector Busby’s mission (http://tvnz.co.nz/national-news/waka-crew-use-stars-easter-island-voyage-5029651) 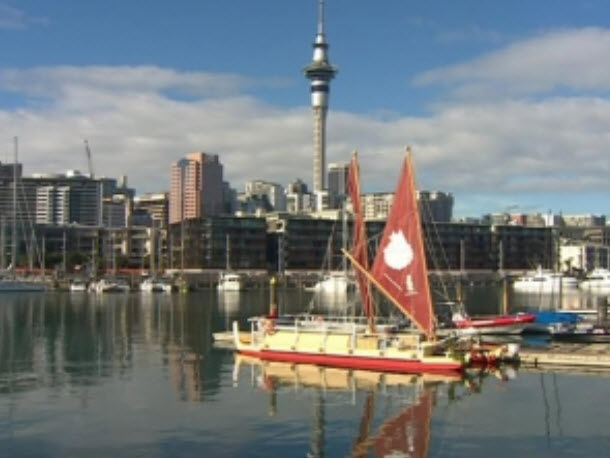